1. Before you start the game you should think about which team lineup is the best for your play style. The easiest choice is a combination of a warrior, rouge and two mages, however, you can also create a team that consists of only mages or, by using the Lone Wolf talent, have only two characters.

2. Check out the game « modes ». If you don’t want to bother yourself with fights and get more experience then you should select Explorer mode. If you prefer a more classic gameplay then you can select from four other modes which offer different difficulty levels – the last one also won’t allow you to save manually.

3. You should have a full team as quick as possible. Fighting alone by using only your main character is very difficult and is suited only for experienced players. Locations of all potential companions can be found on the map in Fort Joy.

4. You have a few options when it comes to customizing your new team members. During your first conversation with them you can decide which class they represent – this has an impact on their attributes and skills. More information about the classes can be found in « Classes » chapter.

5. The number of experience that you get for completing quests and killing enemies is the same whether you use 2 or 4 characters. 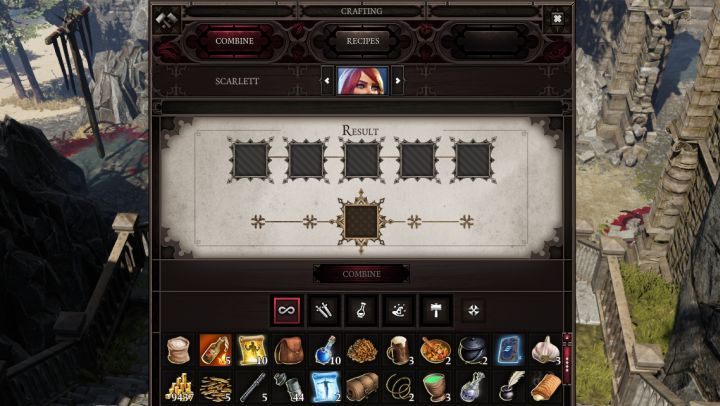 Crafting allows you to create almost any item in the game.

6. If you can, try to complete all quests. Some of them require little to no effort and they offer valuable rewards – whether it is a unique item or a lot of experience points. Of course, descriptions of all quests can be found in this guide.

7. There are many treasures, some that are useful and some that aren’t, scattered around the game world. In most of the cases you have to simply reach them or dig them up from ground to get their rewards. They are marked on the maps of all locations.

8. Invest your points in Persuasion skill and use the character that has it at a highest level to talk to other NPCs. Thanks to that some quests or actions can be solved peacefully or you will be able to simply skip some steps. This skill also allows you to get better rewards for completed quests.

9. Speak with all characters that you come across. A lot of them has something interesting to sell, can give you an interesting information or start a new quest. If you can’t speak with a particular character then you should change the currently selected one and try again – some NPCs display prejudice towards certain races / genders and will not want to talk with them.

10. Invest points in Lucky Charm skill and check out every container that you find. The higher the level of that skill, the higher your chances that you can find a powerful item inside of a container – it doesn’t matter whether it is a chest or a barrel. Use a character that has this skill to pick up items from defeated enemies – this also increases your chances for getting better and/or additional items.

11. Use sneaking ability (« C » key) in order to steal. After that, if you want to steal something, you have to avoid indicators that represent field of view of other characters. However, you must remember about one thing – if someone notices you, they will want to check your backpack. When this happens all your stolen items will be confiscated. You can get out of this situation by using Persuasion skill or by bribing that person. 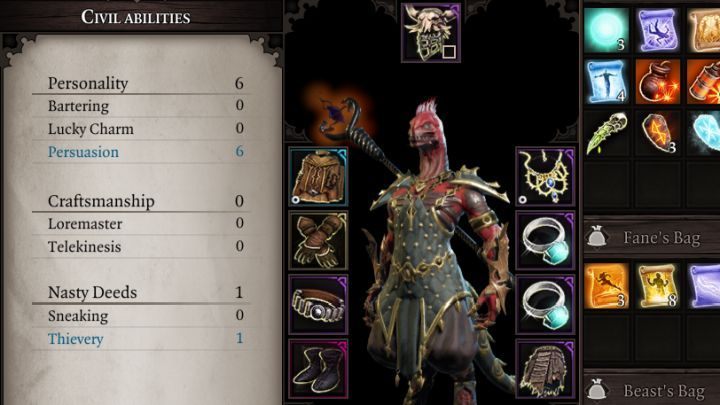 Investing in Persuasion allows you to influence other characters during a conversation in an easier way.

12. Sneaking can also be used for pickpocketing. You only have to approach an NPC from behind and interact with them. On the screen, you can check all items of that person and how « alarmed » a person that you are robbing is. The more you steal, the more filled up that indicator becomes – when it is full you are detected by that person.

13. You should invest a few points in Telekinesis skill. It allows your character to move objects at a longer distance (as well as those heavier). It is also useful for collecting items that are hard to reach – located on mushroom rocks or chests that are on top of a hill.

14. Use Teleportation skill. You can get it during « The Teleporter » quest. You can also teach one of your characters that has developed Aerothurge skill. Teleportation allows you to reach places that were previously unavailable to you – hills or closed passages.

15. Loremaster is one of the most important « non-combat » abilities. It allows you to identify items and enemies (however, a character needs to have Magnifying Glass) – in the second case you can learn about their resistance to certain elements or how many points do they have invested in particular skills. If you want to identify an item / enemy you simply have to click on them with right mouse button and select « Examine » option.

16. Even though it is hard to destroy your weapon, you should keep an eye on them. This applies mainly to melee characters – warriors and rouges. Usually, weapons are difficult to break, however, if you often bash doors, chests or bars you can quickly destroy them.

17. Each character has a few TAGS. They are special descriptions that characterize a character. Every character has, at least, 5 of them and thanks to them a hero can use an additional dialog option during conversations with some of the NPCs. You can check these TAGS in « TAGS » tab in your character’s screen.

1. Before you start a fight with a group of enemies you should check their resistance (if you have that option). You can do this by clicking on them with right mouse button and selecting « Examine » option. If you plan on fighting with an enemy that is invulnerable to fire (it heals from fire damage) then there is no point in using spells with that element. Instead, you should equip your characters with other ones.

2. When you start a battle you should look around a battlefield and find key places. A hill is a good place for your ranged character (archers with Huntsman skill) because this increases their damage. You can also find a barrel with oil and throw it on enemies by using Teleportation skill and then you can set it on fire to deal additional damage. However, you must remember that enemy can use terrain to their advantage as well.

3. You should carefully examine all enemies at a start of each battle. Enemies that have a lot of physical armor usually have a small amount of a magic one which makes them vulnerable to Stun or Frozen spells which renders them incapable of fighting. Enemies that have a small amount of physical armor are vulnerable to Knockdown and Crippled effects. 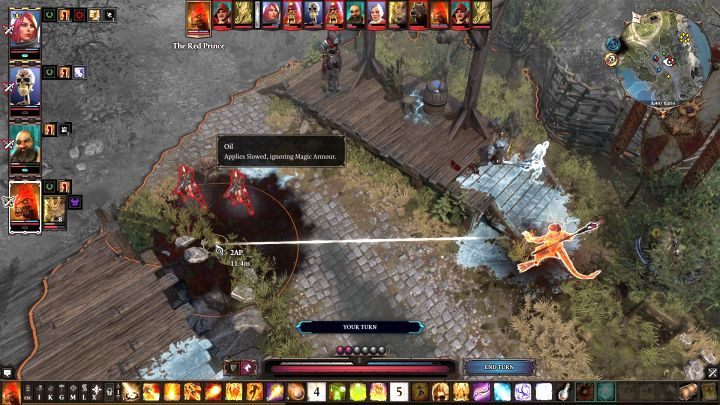 Setting oil on fire will deal a lot damage.

4. Try to not keep your characters close to each other because enemy will be able to attack a few of your heroes by using grenades, spells or arrows.

5. Teleportation skill is useful both during exploration and battles. In the second case, you can use it to move an enemy archer close to your warrior or move an enemy outside of a battlefield making them unable to do anything for a few turns. This skill is available from Aerothurge tree or it can be used thanks to Gloves of Teleportation item (more information can be found in the description of « The Teleporter » quest).

6. If you plan on using a healing spell and/or you want to use a healing potion then you should check your characters’ status first. If someone has Decaying effect then instead of getting back a few health points they will receive a lot of damage which usually ends with their death. This effect is often inflicted by enemy assassins. 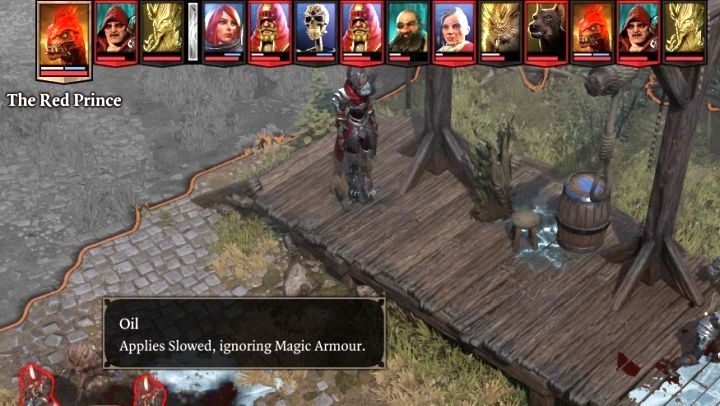 Turn order is displayed in the upper part of the screen.

7. Fights are turn-based and during them characters can move only once per turn. An order of turns depends on Initiative attribute – characters with highest amount of points in that attribute can move first. Because of that you should make sure that Initiative in all your characters is as high as possible.

8. If a character dies during a battle then you will need to resurrect them. You can use Scroll of Resurrection – you simply have to select a character and then select a place in which it will be resurrected. You should select a more « secluded » place and resurrect a hero away from danger.

9. Perseverance and Retribution are very useful during fights. The first one allows your heroes to get back some of their magic / physical armor when crowd control effect ends which is perfect for enemies with less armor. The second skill deflects a part of damage back to enemy – this is very suitable for a warrior that fights in the first line.

1. Each new level gives your characters a certain amount of attribute and skill points to spend. More detailed information and a table that depicts amount of experience required for getting a new level can be found in « Experience and levels » chapter.

2. Number of points for developing your character is limited. This especially applies to points in Combat tab which have the biggest impact on fights. Because of that it is better to specialize in 2-3 magic schools / types of weapons rather than spending1 point on each of them.

3. In the beginning players can’t get their invested points back, however, in the later part of the game (when you unlock Lady Vengeance ship – after about 10-15 hours) you will unlock this option. More information about that topic can be found in « Resetting skill points » chapter.

4. Plan your character’s development. Having two mages dedicated to 2-3 schools is a good idea. For example, one can use Aerothurge, Hydrosophist and Necromancer and the second one can specialize in Pirokinetic, Geomancer and Summoning – thanks to that your team can have access to a large number of different spells.

5. Invest a few points of each character in Memory attribute. Each point increases amount of abilities that can be used in a given moment which is especially useful for mages who can select from dozens of abilities. In the later parts of the game you can encounter items that offer from 3 to 5 Memory points.

6. At least one person in your team should have a developed Loremaster skill, second one should have Thievery and another one Persuasion. Thanks to that someone can be good at identifying items / enemies, other person can be good at lock picking and a hero with good Persuasion can have a better start during conversations with other NPCs.

7. Remember that shortcomings in some attributes and/or skills can be reduced thanks to items. Sometimes, it is better to leave a theoretically weaker item that gives less armor but offers a useful bonus, e.g. increased chance for a critical hit or a bonus to a key skill of that character.

8. One of your characters should have Leadership skill. At a first glance, it offers a small bonus to defense for nearby characters but if you use a lot of items then you will be able to have it a high level. This skill works best for characters that are in the center of a team – an archer or a mage that stands near their companions. There is no point in developing that skill for a warrior that fights away from a team.